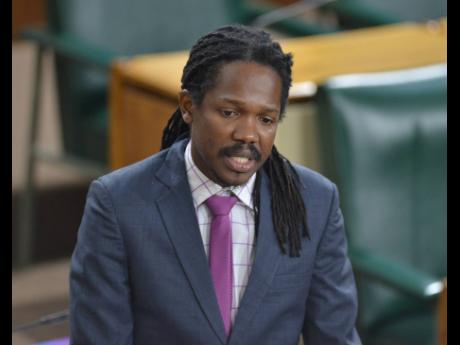 A call yesterday by Government Senator Charles Sinclair for Opposition Senator Damion Crawford to remove a social media post that referred to him as a “liar” was met with an acerbic response from the latter, who made it clear that he was on a mission to establish “truth”.

Sinclair lambasted Crawford last week during a sitting of the Upper House for criticising Prime Minister Andrew Holness over his remarks that some aspects of Jamaica’s entertainment culture, particularly dancehall music, were contributing to ongoing levels of violence in the country.

While debating a bill to amend the Criminal Justice (Suppression of Criminal Organisations) Act, commonly known as the anti-gang law, last week, Sinclair also charged that it was Crawford and the then People’s National Party administration who drafted Clause 15 in the original bill. Clause 15 sought to criminalise the performance and recording of songs which promoted or facilitated criminal organisations or their activities.

Sinclair had said it was Olivia Grange and Tom Tavares-Finson, then Opposition MP and senator, respectively, who raised objections to the controversial clause that was removed from the legislation during deliberations of a joint select committee to examine the principal law.

He charged that there was no mention of Crawford’s name as one who advocated for the exclusion of Clause 15 nor was he referred to as a signatory to the alternate or minority report.

Yesterday, Sinclair demanded that the social media post be removed and that Crawford “provide an appropriate apology satisfactory to me with the same prominence and visibility as the previous post”.

He said he was surprised that Crawford published that, “JLP Senator Charles Sinclair blatantly lied about me today in my absence.”

“Those words I strongly reject. I take my role here seriously and in respect to presentations I do my research,” he added.

However, as debate on the anti-gang bill continued in the Senate yesterday, Crawford charged that he was dismayed and in disbelief that Sinclair had made the assertions he did about him in the Upper House.

Seemingly puzzled that Sinclair had said that he signed the document and could have inked the minority report, Crawford listed the names of those who signed the report.

“So where is the minority report?” Crawford asked Sinclair.

He noted that after multiple deliberations Clause 15 was deleted.

With a copy of the minutes of the joint select committee meeting in hand, Crawford said he saw no record of interventions by the persons Sinclair claimed had lobbied for the removal of Clause 15.

Crawford said the minutes had reflected that he opined that Clause 15 was an attack on lyrics and not an attack on gangs.

“So strident was my representation that on November 8, 2013, The Gleaner newspaper had a headline ‘Crawford defends dancehall against anti-gang law’.

“It says: ‘Junior Minister of Tourism Damion Crawford has indicated that the world record holder and athletic superstar would have been in trouble with the law if Gaza was named a gang under the proposed anti-gang law’.”

Crawford said he stood then and stand now in defence of entertainment and dancehall, which were being labelled as a great contributor to criminal activity. He said the claim could not stand up to scientific rigour.

“There is no truth to the causal relationship between violent media consumption and violent activity,” said Crawford, who cited multiple research findings to support his position.

“Max Fisher 2012, he found no causal link between the consumption of violent media and the actual gun violence, which is specifically what the prime minister was referring to,” Crawford noted.

Meanwhile, making reference to a 2013 article, Crawford said Holness, the then Opposition leader, had said that the Government should take responsibility for crime. He accused the prime minister of speaking with “multiple voices”.

He suggested that it was ironic that the prime minister had exhorted the country on the link between gun violence and the lyrical content from dancehall music when Holness during the 2020 election campaign used dubplates from dancehall artistes such as Skillibeng, Masicka, TeeJay and Intence, who have released songs with violent content.

“If he believes that violent music as he said created criminal activity, why did he choose this song?” Crawford questioned.

Citing lines from TeeJay’s Owna Lane, the Opposition senator said: “Dawg, wha’ mek you do that? Carry my name go to cops. Love you belly you that, dem a go find you dead like two rat.”

“Why him choose that song? ... This is the prime minister’s election dubplates. Him never choose Chronixx, him never choose Protoje ... . That’s hypocrisy, I am not the one that should be questioned here,” Crawford contended.

He cited a plethora of other songs laced with gun and violent lyrics for which he claimed the prime minister used as dubplates for the 2020 elections.

However, Kamina Johnson Smith, leader of government business rose on a point of order. She claimed that Crawford was imputing motives and also making an unparliamentary attribution.

“There is no hypocrisy in the prime’s minister’s position nor did the prime minister use any violent language in his dubplates, which had become quite a phenomenon during the last campaign,” she said.

But Crawford reasoned that in a situation where there was a multiplicity of artistes to choose from – including those who are culturally inclined, positive and conscious – the prime minister chose to select artistes whose lyrical content was at variance with his pronouncement on the link between violent dancehall content and crime.

Senator Leslie Campbell also rose on a point of order, saying that Crawford had abused the privilege of the Senate.

While acknowledging that senators should be given the latitude to go outside of the specific issue being debated, Campbell said that with 14 clauses in the bill Crawford had failed to focus on one provision in the proposed law.