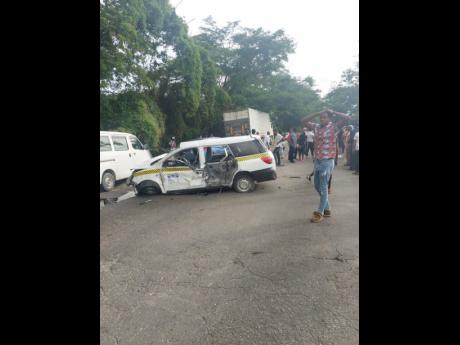 Photo by Andre Williams
A man is in shock at the scene of the July 27 crash that killed Mark Whitter, Pedley Clark, and Kevin Mair. Horace Mair, Kevin’s dad, was the only survivor. 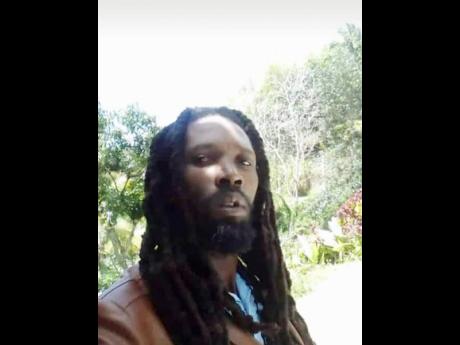 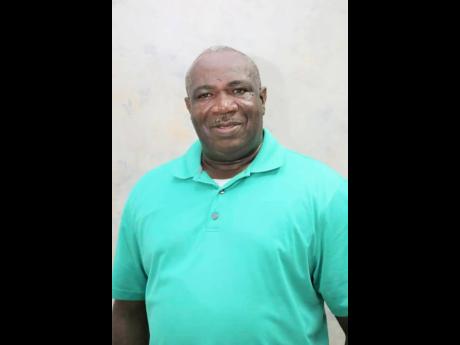 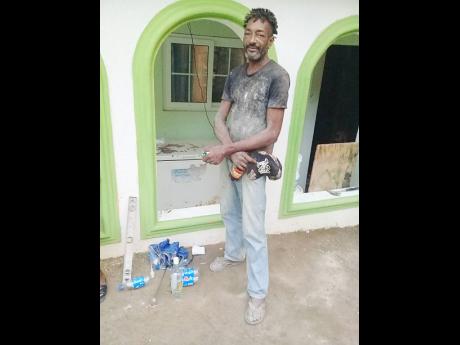 Stony Hill resident Horace Mair was jolted from sleep by a July 27 motor vehicle crash on Mandela Highway that claimed the lives of his son and two of his best friends. Horace, whose son Kevin ‘Breeda’ Mair was the driver, said it is a day he will...

Stony Hill resident Horace Mair was jolted from sleep by a July 27 motor vehicle crash on Mandela Highway that claimed the lives of his son and two of his best friends.

Horace, whose son Kevin ‘Breeda’ Mair was the driver, said it is a day he will never forget.

Kevin Mair and Whitter died instantly after being flung from the mangled vehicle.

Clark and Horace Mair were trapped in the wreckage and had to be assisted by motorists and were then rushed to the nearby Spanish Town Hospital.

Clark succumbed to injuries on July 30 after battling for his life for four days.

The men were heading home from a funeral when Kevin, who was reportedly speeding, lost control of the vehicle, which hit an embankment and overturned.

“Mi nuh remember nothing. God in heaven knows. The only time I remember is when we reach the hospital and we come out,” Horace told The Gleaner from the steps of his home on Monday.

He saw his son’s body, along with Whitter’s, in the back of a police jeep and then realised they had crashed.

Horace still has memories of his son’s face mired in blood and said he regretted “how him kill off himself”.

Despite still suffering some discomfort, the elder Mair discharged himself from the hospital after two and a half days and two nights without a bed.

He sustained whiplash and a few scratches but is still reeling from the trauma of Kevin’s scheduled autopsy on Thursday.

“Whole heap of things go cross mi mind. I say is must God cover me. All the jerk up and flip weh mi hear happen, mi nuh hear or see nothing,” he told The Gleaner.

The elder Mair has been left to wonder whether the other two men had also been asleep during the wild ride or if they were awake and failed to warn his son to slow down.

Horace’s granddaughter was supposed to have travelled with them to the funeral but was left behind because of a last-minute wardrobe malfunction.

The family is now thankful the child did not go.

Arrangements are now being made to bury all three men, who all hailed from the northern St Andrew community of Stony Hill.

Reports from the Central Village police are that about 4:10 p.m., Mair, a taxi driver, was driving a Nissan AD Wagon motor car towards Kingston with three men aboard.

On reaching a section of the roadway, Mair allegedly lost control of the vehicle and crashed into the rear of a Mazda Premacy motor car that was travelling towards Spanish Town, St Catherine.

The driver of the Mazda Premacy was not hurt.

Executive director of the National Road Safety Council, Paula Fletcher, recently bemoaned the ongoing failure of successive governments to make the requisite investments in a safer islandwide road network, even as road deaths and injuries continue to climb.

The 487 persons killed on the nation’s roads last year was the highest since 1985, according to data provided by the Road Safety Unit.

The latest statistics from the Road Safety Unit show that as at August 16, some 302 persons have been killed in 264 fatal crashes since the start of the year.

Fatalities have decreased by two per cent while the number of deadly crashes has fallen by four per cent compared to the corresponding period in 2021.