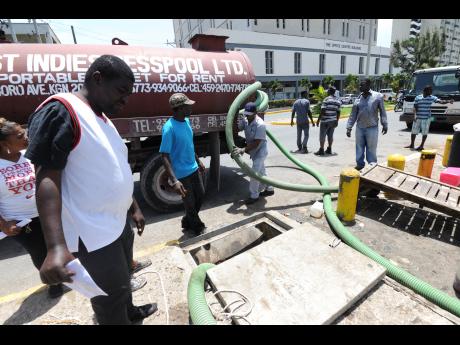 Ricardo Makyn photo
Onlookers gather as workmen from the West Indies Cesspool Limited, pump water and oil from a drain adjacent to the Kingston waterfront at the end of Princess Street today.

The National Environment and Planning Agency (NEPA) is investigating an oil slick in the Kingston Harbour this morning.

It is understood that the slick occurred about six this morning when oil from a generator leak at Digicel's Head quarters on the waterfront made its way into the harbour.

There was a large group of onlookers on the waterfront when a team from The Gleaner/Power 106 News Centre visited the area.

A cesspool truck was observed sucking up remnants of the oil from the company’s drainage system.

Reports are that sandbags have been used to block any additional oil from making its way into the sea.

It is understood that a team from the Jamaica Defence Force Coast Guard was on the scene this morning assisting with clean up.

NEPA's Public Education Manager, Deon Rose, says a team from the agency has been dispatched to the area.

She says further details will me made available to the public as they become available.