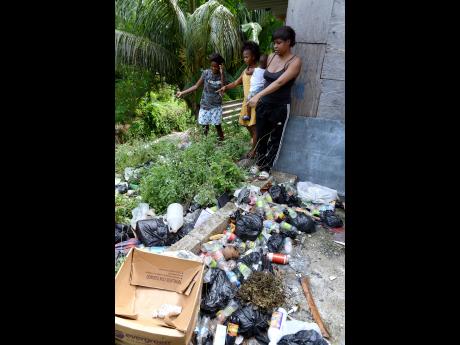 Norman Grindley
Residents of Denham Town point to garbage dumped on the side of a gully as they complain about the absence of a proper garbage collection plan for the community.

Residents of the west Kingston community of Hannah Town, which borders Denham Town, where a zone of special operations (ZOSO) is in place, are livid that their freedom of movement is also being restricted.

"They advertised that the ZOSO is in Denham Town, but they are in Hannah Town too, and our freedom is being taken away as well," said a male resident yesterday.

He pointed to an incident yesterday morning where the driver of a garbage truck was allegedly denied entry to their community and roughed up by cops manning the perimeter of the zone.

According to Hannah Town residents, about 7:00 yesterday morning the garbage truck driver tried to pass through a barricade to enter the community.

They said what they assumed was a regular stop and search by the cops escalated into a tussle with the garbage truck driver, who they claim was arrested and taken to the zone's operations centre.

"We thought they were searching for guns in the rubbish truck, and nothing is wrong with that, but then one police sergeant tell the truck man that him cannot come collect the rubbish, and is like him a try grab up the big man and him flash off him hand," said an elderly male resident.

"They are saying that they are searching for guns and nothing is wrong with that, but some of them, especially that police sergeant, don't know how to deal with people.

"I was coming home in the rain with my baby the other day and they were telling me to stop in the rain again, even though I signed out this morning," fumed one female resident.

The residents said the truck driver was later released by the police and was eventually allowed to collect the garbage in the community.

But in Denham Town, residents of areas close to the Golden Heights scheme complained that no garbage truck has visited the area in months.

They say their alternatives are to either pay 'hustlers' to dispose of their waste or they themselves throw it in a nearby gully.

"Is months now, probably years we don't see no rubbish truck come around here. Is way down the road we have to bring the rubbish or pay somebody to carry it down there. Last week I have to pay a man $1,500 to clean up the gully bank," said Paula Morris, a resident.

"It is a serious thing. We need them to come and collect the garbage we can't live like this," added Brittany Leeshue, as she claimed that her mother pays men from the community upwards of $200 to take garbage from her house.