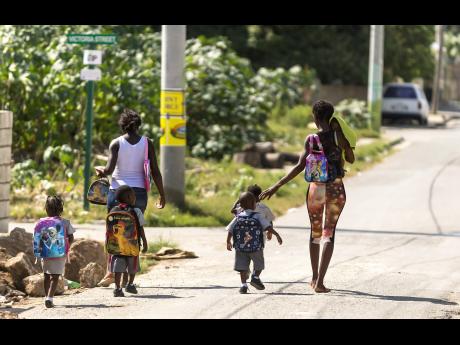 Gladstone Taylor
Children walk alongside adults in Denham Town, within the boundaries of the zone of special operations. 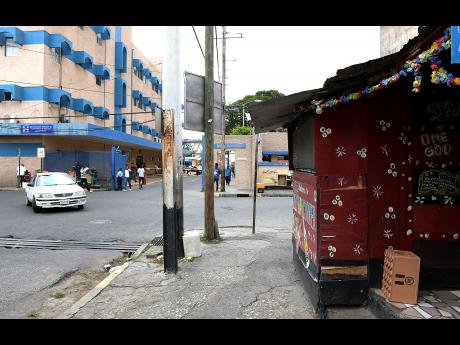 Ricardo Makyn
Persons entering the Kingston Public Hospital last Friday, metres from the shop at the intersection of Princess and North streets where Joy Blake was killed.
1
2

Less than 200 metres from where dozens of police and soldiers are stationed in the zone of special operations (ZOSO) in Denham Town, West Kingston, gunmen have residents cowering in fear, after murdering two people last week.

The last victim was 56-year-old vendor Joy Blake, who was sprayed with gunshots while she opened her stall on Princess Street across from the Kingston Public Hospital about 5 a.m. last Friday.

Blake was gunned down less than 12 hours after men travelling in a red Nissan Tiida motor car pumped more than 20 bullets into Owen 'Barry' Powell at a construction site on Princess Street.

Head of the Kingston West Police Division, Superintendent Howard Chambers, said that investigators were following several leads into the killings but so far no one has been arrested.

On the streets, however, tales swirl as to the reasons for the two killings, with residents in fear that the bloodletting could continue for some time.

Residents said that Blake lived in upper Luke Lane and may have been killed for speaking out against those responsible for murdering her son late last year.

Blake's son, identified only as 'Shawn', and who was reportedly buried in December, was said to be a target following the death of another man from the area.

Last week, persons whispered about the brazenness of Blake's shooters and how easily the two men who opened fire on Powell escaped, despite the number of police and soldiers only metres away.

Police said that Blake was the owner of a motorcycle, which was reportedly stolen and driven by the men involved in a gun attack which left Leighton 'Livity' Coke, brother of convicted drug lord Christopher 'Dudus' Coke, and an accomplice nursing gunshot wounds in Hellshire, St Catherine, last April.

Onlookers said that the red Tiida was parked on Princess Street for some time, before two men exited, walked up to Powell and opened fire.

The men then walked back to the car with their guns in hand and drove past the Charles Street intersection, where police and soldiers man a metal barricade.

Onlookers lowered their voices even more when a group of five policemen dressed in blue passed.

"Dem late, you see when they are passing, though. It is like the gunman them time them or something," said one vendor, who said Powell's killers made their escape by driving up Princess Street, avoiding the left turns that led into the ZOSO.