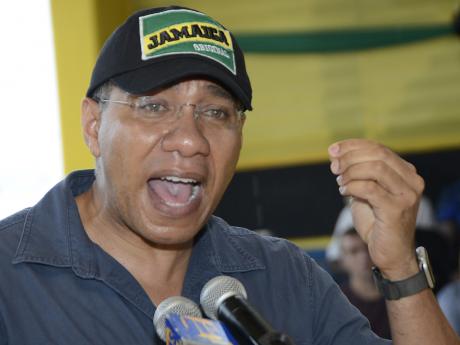 Prime Minister Andrew Holness delivering his speech on the final day of the Denbigh Agricultural Show 2018.

Prime Minister Andrew Holness has declared that the Government and the ruling Jamaica Labour Party (JLP) are not shaken by what he called “the noise” coming from the opposition People’s National Party (PNP).

The Government has been under increased pressure from the PNP over the past few months.

Addressing supporters at a JLP meeting at the Southborough Primary School in Portmore, St Catherine last night, Holness told labourites not to panic amid the political onslaught from the PNP.

He promised that the JLP will counteract the PNP as the party has not forgotten politics while in government.

Responding to criticisms from Phillips about the delay in appointing a new minister of science, energy, and technology, Holness said the government will not be bullied into making a rushed decision.

READ: Phillips tells Holness to give up power if he cannot replace Wheatley

The former minister, Dr Andrew Wheatley, resigned recently amid public pressure over his handling of agencies under his responsibility.

“So all you hear dem run up dem mouth and a talk this government has sat down and calculated its response and every response we have given has yielded success,” Holness added.

Continuing, “In anything, you have two sets of people: those who can and those who say they can. Those who bring results and those who have been trying for 22 years and you give them another 4 and no results”.

Meanwhile, Holness told party supporters that he is strategically building the JLP and attracting new, bright minds who are to be deployed into constituency seats, even those traditionally held by the PNP.