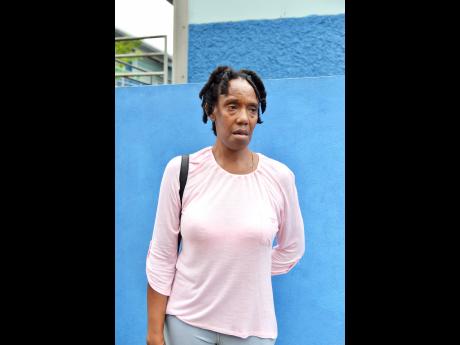 Kenyon Hemans
Verone Fuller-Cochrane is bitter that planned support for the children of the major accident in the Rio Grande Valley in 2008 has dried up. 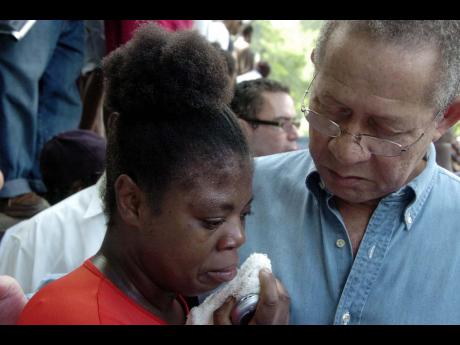 Ricardo Makyn
Then Prime Minister Bruce Golding comforting Carel Brady, whose brother was one of the 14 persons who died in when a market truck plunged into a ravine in 2008.
1
2

Unable to find the money to send her daughter to college is adding to the pain that Verone Fuller-Cochrane still feels 10 years after an accident that claimed 14 lives in the Rio Grande Valley, Portland.

Fuller-Cochrane, who continues to feel severe pain in her left shoulder, which was broken when a market truck plunged into a ravine on December 19, 2008, told The Gleaner that her living conditions, and those of her family, have worsened since the fateful night.

To compound her pain, financial help that was promised in the wake of the accident has dried up.

"We have not received any money from the revolving fund since 2011," said Fuller-Cochrane.

"But I must admit that I received a call from the Poor Relief Department of the Portland Municipal Corporation leading up to the new school term in September, where I was told that I would be getting assistance for two of my children aged 14 and 17 years.

"I only received two khaki pants for each and nothing else. That accident has changed my life for the worst," added Fuller-Cochrane.

She charged that the Government has reneged on its promise to provide assistance to the children right up to college or university level, as her daughter, Vanessa, who was successful in the Caribbean Examinations Council and the Caribbean Advanced Proficiency Examination (CAPE) at Titchfield High School, was unable to attend a tertiary institution, as the family had no money to pay for her tuition.

Then Prime Minister Bruce Golding had launched a special 'Helping Hands Fund' in 2009 to assist children in the Rio Grande Valley who lost their breadwinners in the tragedy.

Under the plan announced by Golding, the money from the revolving fund would be disbursed by the then Portland Parish Council. The money was to be paid out to the beneficiaries to assist them with travelling expenses, school uniforms, food, and books. Payment was to be made to the existing parent, or guardian.

Fuller-Cochrane further charged that in 2011, after the Jamaica Labour Party lost the parliamentary election, the survivors were told that the fund was depleted and that there was no more money available.

"Since then, many children have dropped out of school, and many families broke up under the undue pressure. I am still haunted by that accident, and even today, many, like myself, strongly believe that if there was a retaining wall at the corner of Dam Bridge, the truck would not have slid down that precipice, and the hardships endured by us would not have happened," declared Fuller-Cochrane.

More than 50 children lost at least one parent when a truck transporting higglers to Coronation Market in downtown Kingston plunged over a precipice at Dam Bridge in the Rio Grande Valley.