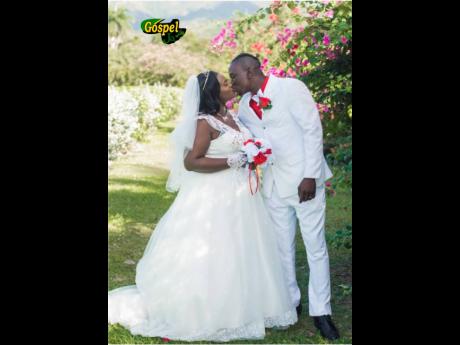 Contributed
Taniel and Deidreann Latty kiss each other after being declared man and wife. 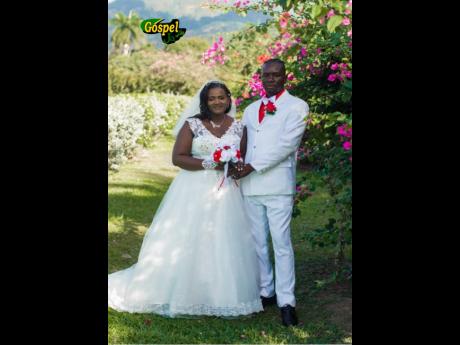 For some, it was love at first sight, and while this was not entirely the case with Diedreann Richards and Taniel Latty of Chapleton in Clarendon, it can be agreed that a seed of love was definitely planted the first time they met.

Both of Chapleton in Clarendon, the two had run into each other in the town some 10 years ago.

“He said hi to my sister because they went to the same school, then I saw him looking at me and smiling. To my surprise, later on, he found out where I lived and told me that he liked me, and I said OK,” recalled Diedreann.

She told Family and Religion that the gentleman had visited her bearing gifts a few times after their first conversation, but according to her, the relationship did not”‘blossom into anything”.

Until 10 years later, when the seed which was planted on first encounter began to germinate.

Initially, the two had consulted the Registrar General’s Department (RGD) and were pleased to learn that the agency would have provided an opportunity for them to get married in a beautifully decorated space, with a minister and all the signing, and documentation would have been take care of. All they had to do as a couple, was to select two witnesses and secure their wedding bands along with a photographer to capture the memories.

The Lattys admitted that they were happy with this arrangement and wasted no time in scheduling their wedding on the day before Valentine’s Day.

Meanwhile, on the other side of town, Gospel JA FM was planning their Valentine’s and anniversary month activities, and the suggestion of sharing the experience of marriage with the listeners, inside the unique feature dubbed ‘The Wedding Planner’, with host Markland Edwards, seemed to be the perfect fit.

The couple was happily selected by RGD Diedreann and Taniel as the recipient of this special addition and Gospel JA FM, along with a few special partners, including Cari-Med, distributors of Pepperidge Farm Cookies, Lasco Distributors, and BK Delight brought gifts and a specially made cake to the table.

The Lattys were also treated to a special serenade by Ian Andrews, and radio host Markland Edwards did not only anchor the broadcast, but was also the MC to a mini- reception ceremony, where they were able to cut their cake and feed each other with cake and wine.

Describing the experience as a “dream come true”, Deidreann said, “Our wedding day was beyond all our expectations. It was awesome. It’s hard to just pick one thing and call it the best part because all of it was so amazing. We felt blessed, special, privileged, and extremely happy and grateful for the experience.”

The decision to get married to her love, Taneil, according to her, lies in their inability to see themselves with anybody else but each other.

She added: “Secondly, it is the right thing to do by God, and also, we complete each other.”