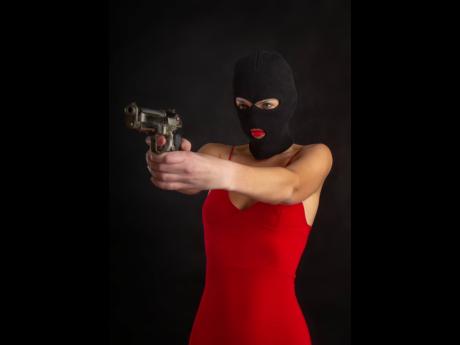 While there are talks on the street that women are now embracing the gangster lifestyle, the police say they have no information, either through incidents or reports, to support such a claim.

While it is no secret that many women in western Jamaica have been known to aid and abet gangsters in their criminal escapades, in law-enforcement circles, there are no known cases of females’ involvement in actual shootings and murders.

“I have no personal experience of tangling with any so-called gunwomen in all my days,” said former top-flight crime-fighter Clive ‘Karate Georgie’ Lawrence, who has had many legendary encounters with gun-toting gangsters over the years. “I have heard of them, but I have never had that experience personally.

While shootings and murders are a regular occurrence in St James, which has had 104 murders since the start of the year, the recent news that a woman was arrested and charged for murder following a drive-by shooting in Montego Bay came as a major surprise to many, including an ex-gangster.

“This is taking the thing to another level. We already have too many gunmen, so we really can’t deal with no gunwoman thing. It is not a good look,” the former gangster told The Gleaner. “I honestly hope that if she was there, she was not actually involved because it would be sending a terrible message.”

In the shooting incident in question, 30-year-old Sudeen Hylton, of Beverly Hill, in Hendon Norwood, was charged with murder in connection with the shooting death of 35-year-old Richard ‘Jimmy’ Baker of Dallas, in Glendevon.

According to reports, on Thursday, August 12, Baker was driving along the Salt Spring Road when he stopped to check something on his vehicle. While he was doing so, a white Toyota Axio motor car drove up beside him and several shots were fired at him. The frightened Baker, who was hit multiple times, managed to drive off and almost immediately encountered a police patrol.

The injured man reportedly told the police what had transpired and provided vital information about the vehicle from which the shot had been fired. The police quickly got on the trail of the vehicle and gave chase. When they finally caught up with the vehicle near Sam Sharpe Square, it was discovered that Hylton was the driver. She was promptly arrested.

Baker, who was rushed to the Cornwall Regional Hospital, reportedly died while undergoing treatment. Hylton, who was subsequently questioned in the presence of her attorney-at-law, was slapped with a murder charge. It is unclear if the murder weapon was found.

According to the ex-gangster who spoke to The Gleaner, women, especially the girlfriends of gangsters, are known to carry the guns of their partners to dances or into spaces where they are likely to encounter the police.

“A real hot man don’t like when his strap (gun) is too far from him, so if he is going into the town (downtown Montego Bay), his girl is usually the one carrying the strap. If he runs into an enemy, he is able to defend himself,” said the ex-gangster.

While there are talks on the street that women are now embracing the gangster lifestyle, both Superintendent Sharon Beeput, the police commander for Hanover, and her St James counterpart, Senior Superintendent Vernon Ellis, say they have no information, either through incidents or reports, to support such a claim.

No date has yet been set for Hylton’s appearance in the Western Regional Gun Court.