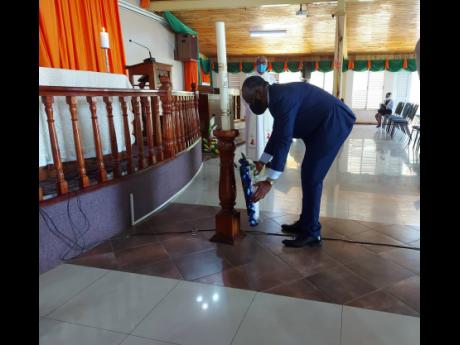 Tamara Bailey
Custos of Manchester Garfield Green lays a wreath in memory of COVID-19 victims from the parish. 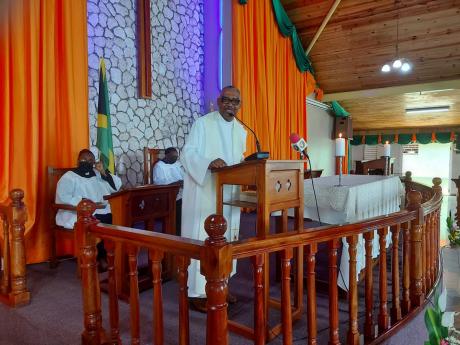 Tamara Bailey
Rector of the Cathedral of St Paul of the Cross Reverend Michael Rowe delivers the homily at the memorial service for Manchester COVID-19 victims.
1
2

Accounting for more than 10 per cent of COVID-19 deaths in the island, the parish of Manchester continues to mourn the loss of its residents, even as the grim hands of the pandemic seeks to tighten its hold.

As at November 1, the national death tally stood at 2,234 and of that total, 266 are from Manchester.

Last Tuesday, The Church Teachers’ College Alumni Association hosted a memorial service at the Mathias Chapel on the campus, in memory of all the persons from the parish who died from the virus.

But, for residents like Joscelyn Crawford Jr, whose parents died within a week of each other from COVID-19, the pain never truly goes away, and the impact of the loss is almost always unbearable.

“It’s horrible. To get two death certificates, two burial orders, to pick out two coffins and see two hearses driving in and taking your parents out of them, to lay them in a sepulchre, is horrible,” was how Crawford described his ordeal

Crawford told The Gleaner that his mother, 82-year-old old Dorothy Crawford, contracted the virus from an unknown source on August 17, as his parents had not left home for a greater part of a year and a half.

He explained that his mother was getting the best medical care at home, including oxygenation. But on August 20, he revealed, her blood sugar level dropped and her doctor advised that she be taken to the hospital.

A broken-hearted Crawford said after admitting in hospital his very alert mother – who told the doctors all the information they needed to know about her medical history – died later that night on August 21.

He said his father, 96-year-old Joscelyn Crawford Sr, was tested that very night, though they had physically separated the two initially, and found he was also COVID- positive.

“Because I was a direct contact with my mother, I had to get tested and go into isolation. My results came back negative a week later, but I was still advised to stay a few more days in isolation. While I was in isolation, my father died,” he lamented.

Crawford said having to bury both his parents has been one the most difficult things he and his siblings have had to do.

“My parents had complications but they weren’t unhealthy. They had the best medical care that could be offered, and my father could have well lived to see 100 years old ... . My parents were married for 65 years, and to put them together in a large sepulchre side by side was horrible. I didn’t just lose my parents, I lost my friends who I spoke to about everything,” said Crawford.

He said it was his intention to have his parents vaccinated. However, he revealed that his mother, unfortunately, wanted to wait for a vaccine option that was not yet locally available.

“... When I hear the antivaxxers saying they don’t want to be vaccinated and they don’t want to wear mask, and everything else, I wonder if they know what they are doing to themselves and their loved ones ... we don’t listen,” he added.

With the parish now recording fewer positive cases and deaths, and hospitals across the southern region trending down from 100 per cent capacity to 50 per cent, Regional Director at the Southern Regional Health Authority (SRHA), Michael Bent, said persons are still not as vigilant as they need to be when adhering to the protocols.

“... We want persons to use these figures as motivation to follow the protocols and, more importantly, take the vaccines. The vaccine is the best defence right now. With over 2,000 persons dying, that’s a lot and we can prevent many of these,” he stated.

Bent said though the SRHA has intensified its vaccination efforts with the activation of additional sites and mobile vaccination units that go door to door, the inoculation numbers are still below target.

“COVID is real and it can happen to anybody and when it happens to you, you don’t know what turn it can take in your life; it can end up in death. We ask persons to forget about the naysayers and take the vaccine; vaccines are available.”

Vice-President of Academic Administration at the institution, Dr Cleveland Robinson, who spoke at the service, said that with the Government having to dump several doses of vaccines and more than half the population still refusing vaccination, studies suggest that these issues, among others, are compounded by illiteracy among some citizens.

“An unofficial survey has revealed that a significant percentage of our population is either illiterate or semi-literate. This could contribute to the inability of many to effectively communicate and accept the urgent need to unite against crime and violence, and the deadly COVID-19 virus.”

Robinson made a call for citizens to become critical thinkers and see the benefits or becoming vaccinated.

“We call upon our citizens to re-engage their minds to think critically and to get immunised from the COVID-19,” he said.

While offering the homily at the service, Reverend Michael Rowe highlighted that the lives of those who have passed can only be truly honoured if citizens change their approach of defiance.

“We are called to remember, to respond and to reform ... our behaviour has to change. We have to recognise that somehow, our behaviour now has to bring new life into our circumstances.”