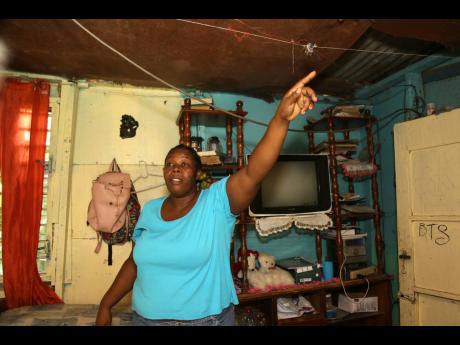 Nathaniel Stewart
Elaine Collins points to the leaky roof above the house in which she and her family live in Chapelton, Clarendon. 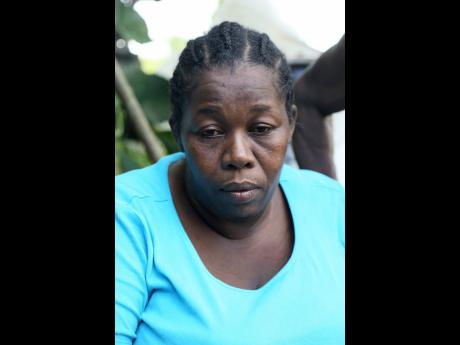 Nathaniel Stewart
left: Collins in a pensive mood as she thinks about the next move to get her children in school.
1
2

This is the first of a four-part series featuring families who are yet to meet the back-to-school requirements for their children.

ELAINE COLLINS and Ira McKenzie are praying that their children will be among those in school on September 5.

The concerned parents are desperately hoping that a miracle will come their way to enable their children to attend school.

Their children, who attend Claude McKay and Thompson Town high schools in Clarendon, will have to make do with the uniforms they had from last year, albeit one is short and the other a bit tight.

Regarding textbooks and school fees, the parents say they can’t think about all that now as food takes precedence.

Collins, who suffers from hypertension and low blood count, said that she would love to work, but she is often too weak to complete any task.

As for the children’s father McKenzie, he has a ‘prostrate condition’ and up to recently, he was passing his urine through a catheter. Any exertion and he starts bleeding and has to be admitted to the hospital.

“I have nothing for them to go back to school, so I don’t know what they are going to do September morning. It’s hard for them to go school. It costs me $1,500 a day for the big one and the small one $1,000,” Collins shared.

Putting meals on the table is just as challenging but thankfully, she gets assistance sometimes from Good Samaritans that enables her to “buy a little food”. Sometimes it’s the produce that she plants, such as cassava, that make do.

Adding to their challenges is the family’s unstable living conditions. McKenzie said that the zinc on the roof is ‘rotten’, which forces the family to cram into one room whenever it rains.

Commenting on his situation, McKenzie said as the man of the house, he feels awful knowing that he is unable to help his children.

“It brings tears to my eyes knowing that if I was strong, this (house) would be finished. A mason work mi do but most of the times I can’t lift any block, if I do mi start bleed through the tube,” he said.

It is this sense of helplessness that sees him enduring the pain to farm the land, planting dasheen, banana and other ground provisions so that his family can have something to eat.

McKenzie is hoping for his health condition to improve, pointing out that he has discontinued wearing the tube and is drinking “a bush” tea which seems to have met the approval of his doctor, who has placed him under observation.

Since drinking the pomegranate leaves, he said he is able to freely pass his urine.

Still, it’s the well-being of his family that worries him most.

“Sometimes she don’t have it to eat, nothing, nights upon night, nothing and we have to just go on and trust God knowing one day God will send a deliverer,” he said with optimism.

Will his two children make it to school on September 5? “I don’t know yet, but I am hoping we will get help for them,” McKenzie responded hesitantly.