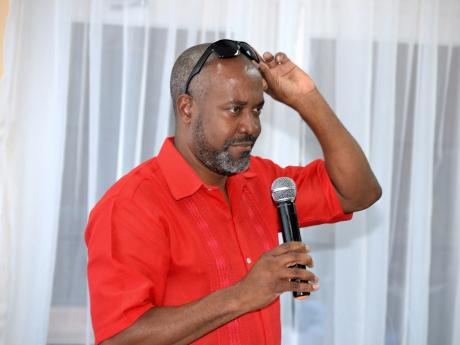 He said his book would allow him to leave a mark and also serve as an alternate source of income, a system he wants to introduce to those in the sector. - Carl Gilchrist photo

Former Jamaica Teachers' Association (JTA) president Clayton Hall is seeking to encourage a culture of writing among educators, noting that it would not just benefit Jamaica's education sector but also provide an alternative source of income for teachers.

Hall, who says he is planning to lead by example, on Tuesday urged dozens of retired teachers who were being hosted by the JTA at a retreat at the Cardiff Hotel in Runaway Bay, St Ann, to take up the challenge.

“One of the lacking segments within the Jamaican educational context is that educators don't often write books,” Hall later told The Gleaner.

“Can you just imagine if we had principals, great principals of the past, if they would have written of their experiences in education? That would form significant fodder for those new principals coming up to learn from them vicariously,” Hall said.

Hall further stated that there are teachers who have taught different subject areas for decades and are a bank of experience which often goes to waste after they leave the education system.

“If we could encourage a culture of writing where teachers would see being an author as a natural progression, not only would we have excellent textbooks which would bear the experiential knowledge of these excellent practitioners, but we would also find a repository of information that the next generation could build on,” Hall said.

He said his book would allow him to leave a mark and also serve as an alternate source of income, a system he wants to introduce to those in the sector.

“I believe that it is important that we leave our mark and not only would it form part of the legacy but books are very lucrative sources of income and in this day and age as an educational leader I am taking as my mandate the introduction of teachers to alternate sources of income,” Hall indicated.

The retreat, organised by JTA president La Sonja Harrison, attracted approximately 100 retired teachers, including principals, who were treated to a range of activities including lunch, massages, entertainment and educational sessions.