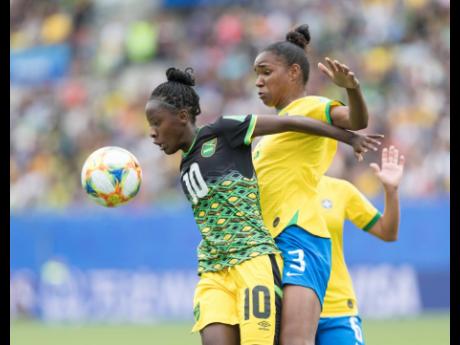 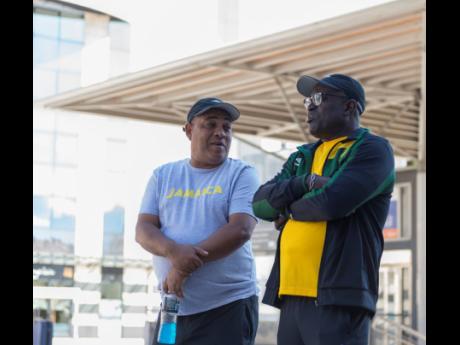 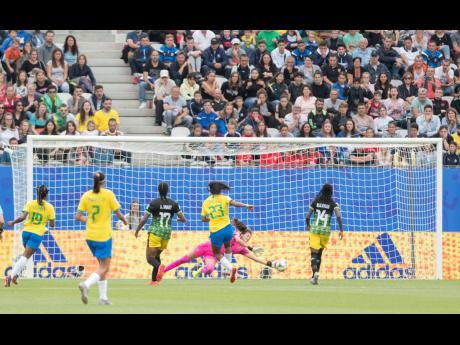 Goalkeeper Sydney Schneider impressed, though not enough of her teammates did in the end. Head coach Hue Menzies pointed to a lack of self-belief as Jamaica crumbled to a 3-0 defeat to heavyweights Brazil in their first-ever FIFA Women’s World Cup match yesterday.

Almost 18,000 fans – the majority of them supporting the Reggae Girlz filled the Stade des Alpes on a cloud-filled afternoon, as the Jamaicans struggled to find their rhythm against a Brazilian team that was desperate to get their campaign off to a good start following a run of nine straight losses, stretching back to August 2018.

Player of the match Cristiane – a 34-year-old striker from São Paulo – did the damage in the absence of the talismanic Marta, scoring three goals, including a sublime free kick in the 64th minute, to send the South Americans to the top of Group C following Italy’s 2-1 win over Australia in the group’s other game in Valenciennes.

Menzies welcomed the lessons from the defeat but believes his players did not back themselves enough throughout the game. He said he is confident, however, that they can make the necessary adjustments to bounce back against Italy on Friday in Reims.

“When we first started the game, we showed too much respect for them. We talked about getting after them, getting behind them, and I think in the second half, we improved,” Menzies said after the final whistle. “That second goal came too soon for us when we were trying to push forward. We were getting numbers forward; I think Chinyelu [Asher] came in and settled down the game for us, got us forward a little bit. Defensively, she was much better. Chantelle Swaby also had a great game; I think she covered a lot of ground, and she’s 20 years-old.”

STARTED ON THE BACK FOOT

Jamaica started the match on the back foot, struggling to clear their lines as the Brazilians looked to establish the tone of the contest after winning four of their 10 corner kicks in quick succession.

Andressa’s tight effort from the back post teased the goal before ending up back into the danger area with seven minutes played, and Debinha, who found herself with green grass and the Jamaican custodian between herself and the goal, would have put the Brazilians ahead a few minutes later had it not been for decisive goalkeeping from Schneider, who raced off her line to gather at the toes of the 27-year-old US-based striker.

Much of the pre-match commentary centred around prolific Jamaican striker Khadija ‘Bunny’ Shaw. She got her first sight of goal in the 13th minute but fired straight at goalkeeper Barbara at the near post after cutting inside from the left channel.

Just two minutes later, Cristiane would make the Jamaicans pay for that miss, freeing herself from Deneisha Blackwood and captain Konya Plummer in the Jamaican defence and rising high close to the penalty spot to head the ball into the back of the net for her first goal for Brazil since April last year.

Ten minutes later, Schneider, who, by all accounts, triggered a Google frenzy in Brazil, and who received praise from her counterpart Barbara, produced another brilliant save, rushing out to close her angles and diving low to keep Debinha off the scoresheet.

Barbara also had to earn her per diem in the 30th minute, tipping a ferocious effort from Shaw over the crossbar after the striker collected a sweet pass from Havana Solaun in stride before letting fly.

Schneider, 19, was again called upon to save the Jamaicans, this time from the penalty spot, extending herself to the right to somehow get her gloves on Andressa’s spot kick after German referee Riem Hussein pointed to the spot for a handled ball by Allyson Swaby.

The Brazilians would, however, get their second in the 50th minute, and again, it was Cristiane who arrived sliding in at the back post to convert a shot-turned-cross from the right side despite the desperate efforts of Plummer.

Cristiane and Brazil’s third arrived in the 64th minute from a centrally positioned free kick just outside the penalty box.

It was really after conceding a third goal that the Jamaicans came out of their shell, closing down play with more fervour and running at their opponents with more purpose.

Still, the young Schneider was forced into another save before the final whistle, showing good reflexes to deny substitute Geyse with another big stop.

“I believe I had a few really good saves, but there were also three goal,s so I wish I could have helped my team some more, but I was just doing my job and being there for my team,” Schneider offered.

Menzies is expecting his team to react against the Italians and believes that the jitteriness of playing in their first match at this level has now subsided.

“Overall, we have a lot of lessons to learn from this game, and we have to go back to the drawing board and get things right for the next game,” said Menzies. “We just have to fix the things that are fixable. Some of the mistakes today are fixable. It’s their first game of the World Cup ever, and that was a tight squeeze on some of these kids. We got through this game, we got the first game behind us, and now we have to look forward to the next game.

“We have been in this situation before where we had a big game that we had to get results,” he added.

The Reggae Girlz’s journey to this point has been one filled with adversities. They must show some of that resolve if they are to really make an impression here and meet their target of advancing from the group.