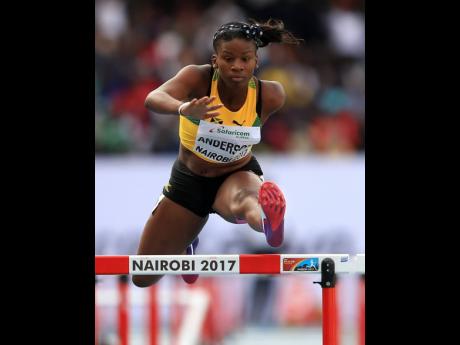 The IAAF named Jamaican junior sprint hurdler Britany Anderson as a finalist for the 2019 Rising Star Award, which recognises the year’s outstanding under-20 athletes from around the globe.

The other four finalists are Lemlem Hailu of Ethiopia, Yaroslava Mahuchikh of Urkraine, Glendon Morejon of Ecuador and Sha’Carri Richardson of the United States.

The winner will be announced at the 2019 World Athletics Awards in Monaco on November 23.

Anderson is one of the most promising prospects in sprint hurdling and has enjoyed a rapid rise up the junior ranks. She twice broke the world Under 20 record at the Motonet Grand Prix in Finland this year clocking 12.79 and 12.71 seconds.

The Jamaican also captured the Under-18 World title in Kenya in 2017 and earned a silver medal in the Under-20 World Championship in Finland in July 2018.She will face some stiff opposition for the honour as the other finalists boast stellar resumes.

Hailu, the African Games bronze medalist, has the Under-20 world -leading time at 1500m with 4:02:97 seconds and made it to the semi-finals of the event at the 2019 World Championships in Doha, Qatar.

Mahuchikh, the Under-20 world record holder and European champion in the long jump, earned her first senior medal at the World Championships, winning silver in the event.

Morejon has the fastest Under- 20 time in the world this year in the 20km race walk, clocking 1:25:29 seconds. She also holds the South American record and the Under-20 world lead in the 10km race walk with 43:04 minutes.

Meanwhile, Richardson is the NCAA 100m champion and holds the World Under-20 records in the 100m and the 200m.