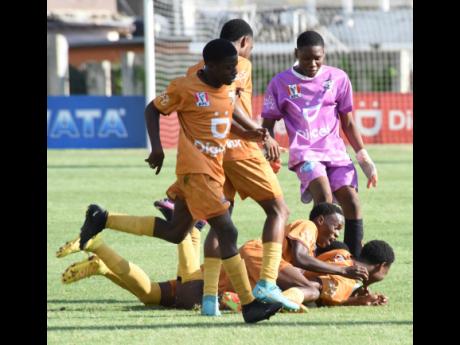 NOT EVEN in his wildest dreams did Haile Selassie High head coach Linval Dixon think that their first season back in schoolboy football would result in an appearance in a final.

Now they are 90 minutes away from their first piece of silverware after defeating Wolmer’s Boys’ School 1-0 in their ISSA/Digicel Walker Cup semifinal at Stadium East yesterday.

Jahwan Payne scored the lone goal in the 56th minute to not only avenge the Manning Cup quarterfinal defeat they suffered at Wolmer’s hands, but also to put them in their first-ever schoolboy football final of any kind.

If you would have told that to Dixon before the season started, he would not have believed you.

Haile Selassie have been used to getting out of the group stages of the Manning Cup and going no further. It is the first time since 2016 that they have played in a Walker Cup semifinal. Difficulties recovering from the COVID-19 pandemic forced the team not to participate last season.

Dixon hailed his players for their fortitude.

“They really dug deep this season. They fought hard and naturally we always believed that we will improve each and every time we play. The team deserved it the way that we played and we should have scored more goals. But a win is a win and we are in the final,” Dixon said.

While it has been a struggle this season because of personnel difficulties, Wolmer’s head coach Jerome Waite said he did not see the desire he would have wanted as his first season with Wolmer’s ends without silverware.

“I think they wanted it more than us. Some people have called it the losers’ cup and you try to motivate them to the point where achieving this cup is second to the Manning Cup. And today they didn’t display what was expected of them,” Waite said.

Haile Selassie’s opponents in Friday’s final will be Tivoli High who have a chance to lift their first Walker Cup title since 2005 after defeating St George’s College 1-0 in the second semifinal.

Dwayne Johnson’s 26th-minute header was the difference as Tivoli survived an onslaught in the second half and close shaves to book their place in the final.