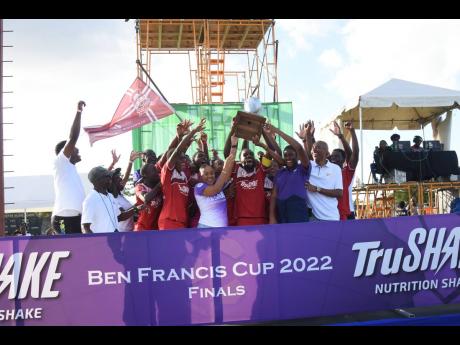 After enjoying the early exchanges and creating three golden opportunities, Edwin Allen found themselves trailing against the run of play in the 18th minute when Orane Watson converted from the penalty spot.

Glenmuir now had their tails up and took the game to their opponents but never managed to extend their lead going into the half.

Five minutes after the interval, Glenmuir would double their lead when the clinical David Reid turned home a low cross from Khymion Wright.

Andrew Peart, coach of Glenmuir, said it feels good to bring the silverware back to the May Penn-based school.

GOOD START TO A NEW CYCLE

“The feeling is good because it’s been a while since we’ve won anything and this is a good way to start a new cycle. We have five players leaving the theatre, so we’ll have the majority of the team for next year,” Peart said.

Peart admitted the win was also sweet revenge for their quarterfinal loss that knocked them out of the daCosta Cup.

“It took us weeks to get over the agony of that defeat but this is a testament to the heart that the boys have. All the games we watched told us Edwin had a strong 25-30 minutes start, so once we could manage that, to play how we want to, we could succeed in this game,” he said.

Coach of Edwin Allen, Tafari Burton, who congratulated Glenmuir, could not explain his team’s performance on the day.

“We didn’t execute our chances, especially in the first 15 minutes of the game where we got about three half chances. In games like this when you miss your chances it can cost you,” Burton said.

“After pressuring Glenmuir for the first 15 minutes, Edwin Allen stepped back and invited the team which cost us. I don’t know why they did that because that was not the instruction. You give a good team space and time, they will make use of it,” he added.