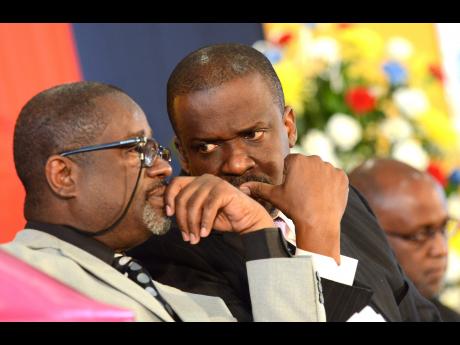 Rudolph Brown
The Reverend Dr Devon Dick (left), immediate past president of the Jamaica Baptist Union, chats with its general secretary, the Reverend Karl Johnson. The Baptists have lost scores of acres of land to squatters. 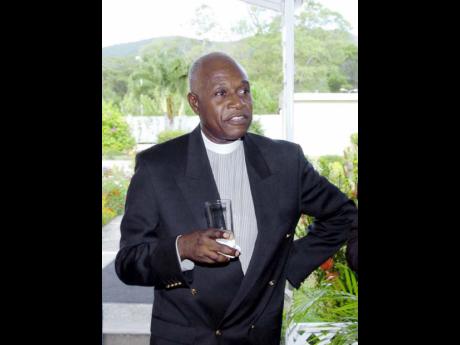 File
Reverend Jim Parkes says the Anglican Church has suffered at the hands of squatters in all parishes in Jamaica.
1
2

The Moravians, Methodists, Catholics, Anglicans, Baptists have all been bitten by the scourge of squatting, with persons, sometimes with the assistance of politicians, taking over church lands.

The Sunday Gleaner last week confirmed that some churches are now trying to identify and secure titles for properties they own islandwide, while others have just accepted that they have lost the lands.

The Moravian Church has already confirmed that squatters have captured 435 of 500 acres it owns in Lititz, St Elizabeth.

Anthony Tomlinson, who heads the Moravian Property Division, said the loss has been devastating, and the illegal occupation has been aided by politicians.

"Over the years, persons have taken over sections of the property, and after a certain time, if they have been paying land taxes, they can secure titles. That is how we have lost much of these lands," Tomlinson told The Sunday Gleaner.

"We did a survey of the land in recent times and the surveyor informed us that most of the titles adjoining the land were issued by the Government of the day.

"According to the surveyor, the Government identified the lands as idle and issued titles to the occupants after years had passed. Many of the acreages were titled to the occupants in the 1970s," said Tomlinson. "About 65 acres of the property in Lititz is what we have left," added Tomlinson.

The Moravians had settled in the south-central section of the island, establishing at least 51 primary schools, and the Bethlehem Teachers' College.

The Baptist Church has had a "depressingly" large portion of its lands captured by squatters, according to the Reverend Karl Johnson.

"Our experience is similar, but we have not tabulated the number of acres we have lost because I think it would plunge us into depression. It's really sad. We are always trying to balance it with a genuine need for housing solutions and to be compassionate and so forth.

"But too often, what is coming across is a kind of disregard for just any framework of respect for the laws and landownership," Johnson told The Sunday Gleaner.

He argued that, in too many instances, the squatting did not take place in circumstances of need, but the squatters were driven by callousness and a sense of entitlement.

"We have lost lands in every parish, barring the south (of the island) because we don't have properties in Manchester and St Elizabeth. Remember that we are coming from the free villages period. So places that have been the most painful loss would be like in Point Hill in St Catherine and Hague, Trelawny.

"Eventually, we had to just write off about eight acres, saying it was towards housing," said Johnson, as he noted that the William Knibb Memorial High School in Falmouth should have been built in Hague.

According to Johnson, the Baptist Church has been trying a stronger and more robust system of engagement, but it was hard as in many instances the elected political leaders feed this callousness.

Johnson pointed to lands the church owns in Rio Bueno on the border between the St Ann and Trelawny, which have been overtaken by squatters, and noted that this was where Calabar High School started.

He said the Baptist Church has become more vigilant and proactive in making sure that no more lands go under illegal occupation, while it battles the mentality that squatters had a right to church land because it was not being put to use.

The Reverend Jim Parkes, who heads the properties division of the Anglican Church, said his denomination has suffered at the hands of squatters in all parishes in Jamaica.

"A resounding yes is the answer and all of us (denominations) have the same problem. But we have been doing a mapping of properties owned by the churches and quite a bit of it has been overtaken by squatters," Parkes told The Sunday Gleaner.

He said the church has identified 900 plots of lands of varying sizes that it owns across the island, in all parishes, but he could not say how much is being occupied by squatters.

According to Parkes, that number should be known when a current study is completed.

Properties owned by the Catholic Church in Sligoville, St Catherine, have been taken over by squatters, as well as a property on Mountain View Avenue in St Andrew.

"The church has never been able to take occupation of the Mountain View Avenue property," Catholic deacon Ronald Thwaites told The Sunday Gleaner.

The Methodist Church has lost property in St Ann to squatters, and that is only one of several of its properties taken over.

"We have not been as bad as the others in terms of acreages. But we, too, have had challenges. We have one particular case at Cloisters in St Ann. Ten acres were involved, but we sold it to the Government.

"We lost money-wise, because we did not get market value, but at least we got something for it," said the Methodist official who asked not to be named.

The Government, in June, announced that it was preparing to spend $37 million to undertake a comprehensive census to determine the number of squatters locally, and to assess the characteristics and scope of informal communities in the country.

Scary for squatters! - Residents of Lyndhurst Road property fighting eviction from the only place they ever called home
Phillips vows to help persons facing eviction from Lyndhurst Road properties
Manchester spared squatting plague
No squatting problem for Adventists and newer churches
Party time in Portmore Lane - Residents relieved as the Government aims to move them from being squatters