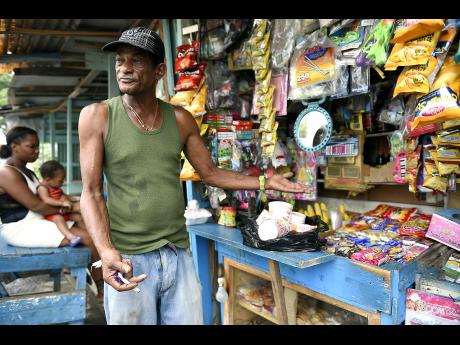 Gladstone Taylor
Herman Dujoy, a vendor in Denham Town, expresses his dismay at how the zone of special operations has negatively impacted his sales.

Residents of the west Kingston community of Shooters Hill, which was recently included in the Denham Town zone of special operations (ZOSO), are annoyed with the restrictions they are now facing.

According to several of the residents, the ZOSO is a nuisance in their lives.

"It is slowing up my business. I'm glad that the gunshot them cool down, but them telling us to lock up and go in off the road by 7 o'clock at nights, and that is mashing up my business," said a resident who operates Kerry and Sons' Ice-cream Shop in the community.

"We can't work with the lockdown thing, and they are asking us to show ID every time we a walk out of the place. This is foolishness, and nothing not going on up here," added fellow resident Maxine Wilson.

The security forces have argued that the zone was expanded to include Shooters Hill because there are indications that criminals could be using it as a safe haven to escape the dragnet in Denham Town.

Major Basil Jarrett, civil military cooperation officer at the Jamaica Defence Force, last week said that while Shooters Hill was not among those flagged as a hotspot for gang violence, its proximity to Denham Town could compromise the integrity of the ZOSO.

ZOSO’s solid start - Social intervention in Denham Town gets thumbs up
Running for fun in Denham Town’s ZOSO
‘Save our sons!’ - Crying Salt Spring mothers appeal to PM to declare the area a ZOSO
ZOSO bad for business but ... Operators brace for short-term fallout but expect long-term gains