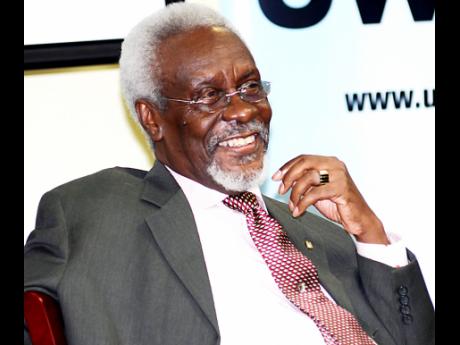 P.J. Patterson, ON, OCC, PC, QC, was Jamaica's sixth and longest-serving prime minister - 1992 to 2006. His book, 'My Political Journey: Jamaica's Sixth Prime Minister', which was published by The University of the West Indies Press, will be launched next week. The Gleaner will be publishing excerpts every day until the launch. This is part six.

When G. Arthur Brown retired for the second time as governor of the Bank of Jamaica, he shared with me one of the reasons he felt impelled to write his memoirs. As they prepared for the final federal conference with the Colonial Office in London, Egerton Richardson and Brown, two of the brightest and most trusted servants in Jamaica, were tasked with preparing a special document which Norman Manley entrusted to a safe and confidential pair of hands for personal delivery to Grantley Adams with the message: "I believe we can find a solution to our conundrum. If you as Premier of the Federation propose it, I will be the first to give my full endorsement. I believe this document provides the only way out." To Manley's total dismay, Grantley Adams never once mentioned at the conference any of the ideas or suggestions he had received. Manley concluded that the omission was deliberate and constituted a betrayal.

"You can hardly imagine my consternation when years after Adams' death his devoted secretary invited me to visit her on my next trip to Barbados. There, she handed me an envelope, still with its original seal. I realised Grantley Adams had never opened it and hence was unaware of its contents," Arthur Brown related.

Unfortunately, within a few weeks of that conversation on the veranda of Vale Royal, Arthur Brown suffered a recurrence of his cancer, and so history can only conjecture as to the outcome if the envelope had been opened and the letter had been read and introduced by Premier Adams in the Lancaster House Conference.

At the time of the federal conference in London, I was a law student there, and on his way to Heathrow Airport, Manley invited me home to assist in the referendum campaign. I did not hesitate as the campaign would fall during the summer holidays and provided a welcome opportunity to join in the thrills of a campaign that would decide the future of the federation.

The Jamaican legislature had to approve the enabling law and regulations to permit the holding of a referendum. The traditional election symbols - the head for the PNP and the hand for the JLP - were barred. The tree was chosen for those voting to remain and the bell for those opting to leave.

I wrote an article, 'Jamaicans Abroad and Federation', for the YES campaigners, which was published in the Daily Gleaner of 31 August 1961: "Most of the Jamaicans who live abroad are ardent supporters of the Federation. The reasons for such overwhelming support by workers and students alike are not hard to find. Although they explained their attitudes in a variety of ways, certain ideas were shared in common."

I approached one person who has been resident in Britain for seven years, but he was almost indignant when I asked him what he thought of the Federation. "With my experience of living here, how could I be anything else but a Federationist?" he asked me. This response was fairly typical of others, for when West Indians live together, they soon discover a unifying bond. Thus, it is no coincidence that members of the University College community are such vigorous exponents of the Federal idea.

By living together, they soon learn that the accidents of birth do not produce any real difference of upbringing or outlook. Our tastes for food and drink are similar, but in many respects unique. We share a common cultural background, not yet fully developed, but clearly emergent.