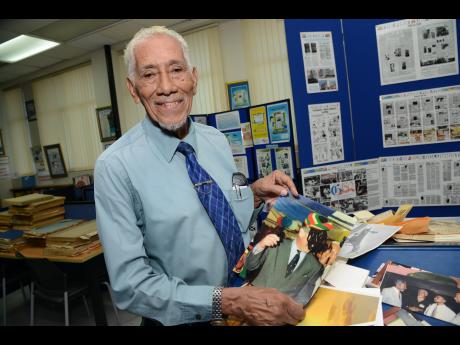 Former Prime Minister P.J. Patterson has joined those paying tribute to world-renowned photographer Junior Dowie who was laid to rest yesterday. Here is an edited version of that tribute.

I met Junior Dowie as a new recruit to the photography team, while working during the summer holidays at The Gleaner on Harbour Street.

Since I was a sports reporter in the newsroom and his passion for sports was also evident, we travelled in The Gleaner car to many assignments.

We developed a friendship that never ended - no matter where we saw each other - even to the very last time - there was always that nod, smile or greeting which reflected our personal bond.

His photographs were more than pictures he snapped, they were a revelation of the artist within him - in a flash, he could capture the moment which no one else did. He never sought to degrade but to uplift and inspire.

Junior Dowie spoke volumes with his camera and won deserved acclaim by the nation and fellow journalists.

His hallmark was a well-woven tapestry of his humour, humility, his willingness to teach and inspire younger members of the craft and his sense of loyalty and devotion to duty.

The profession has lost a pioneer. He has left a rich legacy that will enrich the craft.

I extend my deepest sympathy to his children, grandchildren, great-grandchild and the entire bereaved family.