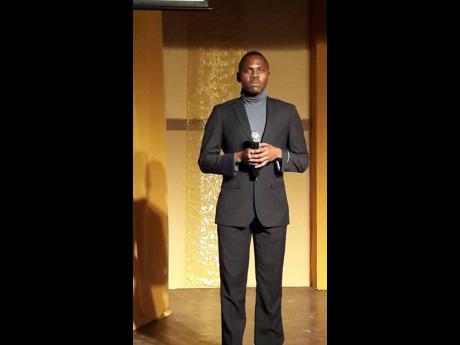 IF THERE was ever a time to effect change in one’s society, that time would be now. André Bernard, 32, is on that mission, by beginning “groundbreaking research” in uncovering the connection between masculinity and language and how that helps to mould masculine identities in Jamaica.

“We cannot effectively connect with our men until we understand how it is they communicate,” says Bernard, one of 300 international awardees of the Hong Kong PhD Fellowship Scheme scholarship programme. Bernard, who is currently a lecturer in the Department of Language, Linguistics, and Philosophy at the University of the West Indies (UWI), Mona, will leave his position to conduct his doctoral thesis in Hong Kong, China, later this year.

Originally from Montego Bay, St James, born at the Cornwall Regional Hospital, Bernard was mostly raised in a single-parent household headed by his mother, who would often describe herself as “both mother and father”. He notes that although he is the last of three children, he grew up as an only child.

The years progressed and Bernard transitioned to Cornwall College, sharing with The Gleaner a humorous story in which he gave Cornwall College as his only option in all the spaces provided on the slip of paper given. These choices would help guide him in the secondary school of his choice, after sitting the Grade Six Achievement Test examination. “In St James, the only place to go was Cornwall College ... and I ended up going,” says Bernard.

Bernard fell head over heels with the arts while attending his much-loved school for seven years. Admitting that he was always an arts-based child, he told The Gleaner that subjects like Spanish, English, and literature had always piqued his interest, to the point where, after completing 10 Caribbean Secondary Education Certificate subjects, he would frequently forget that he had done mathematics, and would usually recall doing nine rather than 10.

Elected a deputy head boy in his final year, Bernard became interested in linguistics after being exposed to it in communication studies class. He recalls his teacher asking a question in class one day about language and community, but the entire class remained silent, indicating that no one knew the answer. Bernard, on the other hand, came to the rescue by taking the bold step of answering, which rewarded him with the satisfaction of knowing that he was correct. At the end of the class, his teacher recommended that he attend the UWI and study linguistics, giving him a textbook, which he still owns today, to begin his journey.

Bernard, later transitioned to the UWI, Mona campus, “the only university in the Caribbean,” he jokingly exclaimed as he took the advice of his teacher and studied linguistics.

Soon, Bernard will reside in Hong Kong as a full-time student, studying for four years at Hong Kong Baptist.

He ensured to seek a linguist who, he says,”‘research interest best aligned with what he wanted to accomplish and would be willing to supervise him”.

MARGINALISED FOR BEING PROPER

Bernard shares that his personal experiences growing up in Jamaica allowed him to feel “othered”, because of his language use. He says, “You are told to go to school and do well, and talk English; but then, when you do it well you are marginalised for being proper.” As such, he is mindful that there is a notion that “being proper and refined” does not align with masculine ideals and therefore, view people as ‘different,” says Bernard.

When he is not conducting research, Bernard is “somewhere on the artistic field, whether singing or acting,” and being well involved in theatre productions. But this type of involvement is also shunned by many in society, stereotyping males who are expressive as being feminine.

With all his experiences, Bernard wanted answers to the many questions that stirred around in his head, and are still a mystery to him today. The common question, “How are men really supposed to be speaking in order to be considered men?” has sparked a determination in Bernard, who “will own [his] non-masculine way of speaking”.

This study is one to consider highly important as currently, “young boys and men are aspiring to be ‘ideal men’ ... that does not encourage expression”. Bernard remarks that if men do not express themselves, they will have no chance of finding their authentic selves, as “there is no life if you are living unauthentically,”says Bernard.